The Leipzig Charter on Sustainable Euro¬pean cities (EU Spatial Planning Ministers, May 2007), considers “creating and ensuring high quality spaces…to be of crucial importance for strengthening the competitiveness of European cities”. This Leaflet considers this statement from the perspective of Kosovo – why it is just as valid here as elsewhere in Europe and what it means. Recent years have witnessed a rapid growth in the population of Kosovo’s towns and cities, most notably Pristina which has doubled in size since the end of the conflict. This physical change has been paralleled by social upheaval as traditional bonds of clan and family are eroded with urbanization. Infrastructure, such as roads, open space and schools as well as water, sewers and electricity has struggled to cope with the demands of more people with increasing expectations. 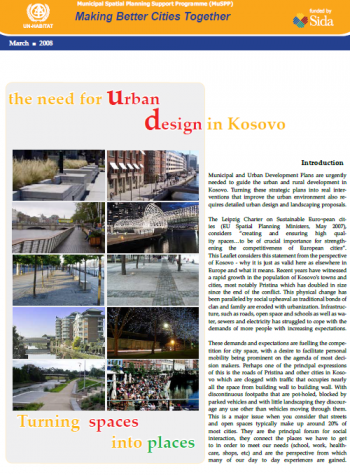