Climate change has become one of the biggest global threats and its impacts are already being faced by many cities and human settlements around the world, including those in Kosovo. The way cities are planned, built and managed (along with the respective energy generation, transportation, buildings, food and waste management systems) is key to reducing emissions, cutting pollution and economic costs, and achieving the Sustainable Development Goals (SDGs). While cities in the developed countries are increasing awareness, action and response to climate change and resilience building, those with less human and financial resources are lagging behind.

UN-Habitat Kosovo has joined the UN-Habitat’s #ClimateAction4Cities campaign to inspire action in urban areas to prevent climate change and adjust to its ongoing or anticipated impacts. Among the efforts, UN-Habitat Kosovo has conducted the Kosovo-wide “Capacity gaps and needs assessment of the planning and urbanism municipal departments on integrating climate change aspects into spatial planning” survey throughout the period of August to September 2021. The survey aimed at assessing the human capacities (knowledge and expertise) of the municipal Directorates of Planning and Urbanism in terms of integrating climate change aspects into spatial planning, as well as gathering and showcasing current local best practices for climate change mitigation and adaptation. It targeted the Heads of Planning divisions (or equivalent key municipal staff for developing spatial planning documents) of all 38 municipalities.

This report presents the findings of this survey, which will serve as a baseline for local capacity building, knowledge exchange and measure planning on climate change and spatial planning in Kosovo. 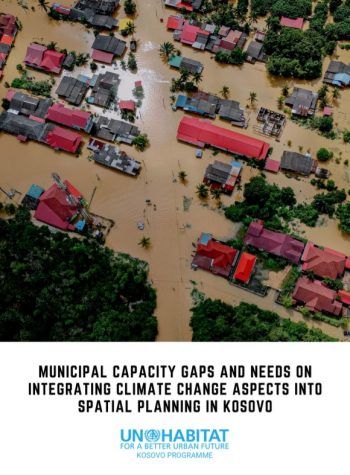