Current strategic environmental assessment (SEA) Report is prepared as a conclusive document of the SEA process for Prizren municipality municipal development plan (MDP/PMDP2025). It is the main output of SEA and outlines the findings of the assessment process. The MDP is a statutory document prepared on behalf of the Prizren local authorities with the support provided by the UN-Habitat Kosovo.
The European Directive on SEA (2001/42/EC) was adopted into Kosovos legislation by Kosovo’s Law on Strategic Environmental Assessment in 2010. According to that law, ´the purpose of Law on SEA is to ensure that environmental consequences are identified and assessed during preparation and before the adoption of certain plans and programmes, the law lists municipal development plans as ones with statutory requirement to conduct SEA (due to that fact the screening process to assess if the plan is a subject of SEA was not performed within current assessment). Kosovo’s SEA legislation follows the general principle that the SEA process should be carried out in parallel with the assessed plan preparation process and it should be finalized prior to plan’s approval in order to include necessary changes or corrections into the plan. Due to the fact that the Prizren MDP was prepared (not finally approved) before the Law on Strategic Environmental Assessment came into force the current SEA process was carried out after the PMDP 2025 preparation (before final approval by the municipality), the process went of from May to October 2012. 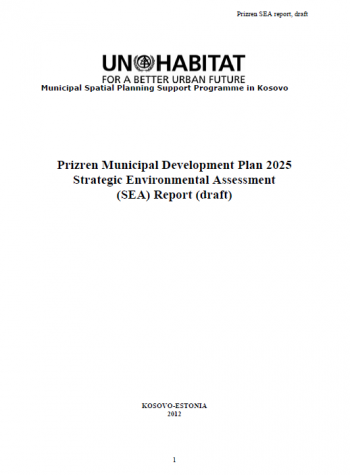