The visioning workshop is the initial step in the process of drafting long-range development plans.
The purpose of Partes-Pasjane 2022+ Visioning Workshop was to explore the aspirations, issues
of concern, and visions of various stakeholders for this municipality.
The visioning workshop was an opportunity for the municipal stakeholders to get familiar with the
role of the visioning in planning, methods used to identify spatial issues and setting goals as well
as formulating the initial spatial concepts that serve as a basis for drafting municipal spatial plans.
The input of the workshop has been an important component in the municipal planning process
and the first step in gathering public input for the plan.
In addition, participants shared their broad vision for what they would like Partes-Pasjane/ Partesh-
Pasjan Municipality to be in ten years and beyond.
The visioning workshop was jointly organized by the Municipality of Partes-Pasjane/ Partesh-Pasjan
and UN-HABITAT Kosovo, based on the Memorandum of Understanding for the implementation of
“The Municipal Spatial Planning Support Programme”, signed by the parties at the end November
2011- closely supported by UN-HABITAT partner institutions: the Ministry of Environment and
Spatial Planning, partner at central level; Cultural Heritage without Borders, partner in promotion
of cultural heritage and Friedrich Ebert Stiftung, partner in promotion of public debates. 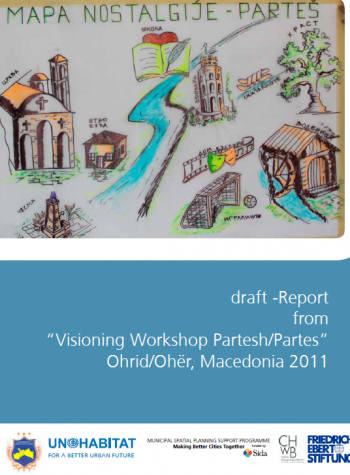